Global Humanitaria donates an ambulance and food to Bila Tserkva 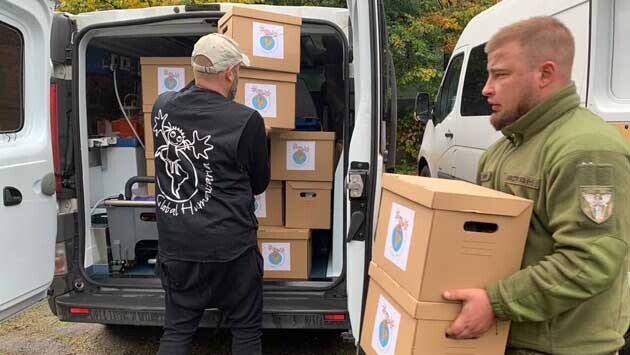 A team from Global Humanitaria, including Andrés Torres, president of the organisation, recently travelled to Ukraine to deliver an ambulance and 500 food rations, as well as personal hygiene items, to the Military Hospital in Bila Tserkva, a city of over 200,000 inhabitants that was bombed even while personnel from the NGO were in the city. No harm came to any of the team.

This was the fifth journey to take emergency aid to Ukraine that the organisation has made since the start of the war. Global Humanitaria maintains its presence in the area, studying the needs of the most vulnerable people with a view to offering solutions as soon as possible. To this end, the organisation is working to promote a number of projects in the field of education. It is estimated that 5.7 million school-age children have been affected since the beginning of the war, 3.6 million of them due to the closure of schools. In addition, some 43,000 teachers have been displaced by the war, and 2,151 education sector buildings have been damaged.

The war in Ukraine threatens 7.5 million children. Global Humanitaria’s main priority in this emergency is to provide basic humanitarian assistance to children and their families, as more than 4 million people have fled Ukraine, with women and children making up 90% of the refugees who have sought safety in other countries.

With more than 20 years’ experience in the field of international cooperation, we remain committed to providing emergency aid to those most affected by the war. Among them, the most vulnerable of all: children.